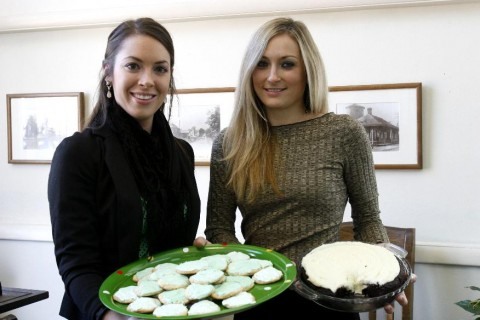 How cute is this St. Patrick’s Day greeting from my former co-journalist, Liz Coe, and me? Six years ago we were working at the Loudoun Times as the education and business reporters. I miss those days. (I baked green cookies today, in case you were wondering). Happy Luck of the Irish to you all!

Ingredients for the cake:

Ingredients for the topping:

Preheat the over to 350 F, and butter and line a 9 inch springform pan.

Pour the Guinness into a large wide saucepan, add the butter — in spoons or slices — and heat until the butter’s melted, at which time you should whisk in the cocoa and sugar. Beat the sour cream with the eggs and vanilla and then pour into the brown, buttery, beery pan and finally whisk in the flour and baking soda.

Pour the cake batter into the greased and lined pan and bake for 45 minutes to an hour. Leave to cool completely in the pan on a cooling rack, as it is quite a damp cake.

When the cake’s cold, sit it on a flat platter or cake stand and get on with the frosting. Lightly whip the cream cheese until smooth, sift over the confectioner’s sugar and then beat them both together. Or do this in a processor, putting the unsifted confectioners’ sugar in first and blitz to remove lumps before adding the cheese.

Add the cream and beat again until it makes a spreadable consistency. Ice the top of the black cake so that it resembles the frothy top of the famous pint.

*From “Feast” by Nigella Lawson.

This is an article I wrote for my grandmother’s 100th birthday. It appeared in the March 27 edition of the Loudoun Times-Mirror.

In 1913, during the relatively quiet year after the Titanic sank and before the escalation of the First World War in Europe, Geraldine Jane Potts James was born to Linda Kidwell and Walter Potts at their home in Hillsboro, three days before Easter on March 20. Their kitchen counter meat scale read that she weighed 4 lbs., give or take a few ounces.

One century later and several towns over, Geraldine celebrated her 100th birthday March 24 at the Loudoun Golf and Country Club in Purcellville amongst more than 120 close family and friends. The celebration of her birthday and life was hosted by her three children; Roberta East of Purcellville, Linda James of Round Hill, and Gerald James of Herndon.

As children of the Great Depression, Geraldine and her brothers Raymond and Lloyd Potts – who lived to see 93 and 94, respectively –were expected to pitch in on the farm, especially after their father died when she was three years-old. Her tasks included feeding the chickens and milking the cows. To earn extra cash, her family would dress and prepare their chickens and eggs and load them on the train at the Purcellville station to be sold to city dwellers in Washington, D.C.

“You couldn’t buy gasoline for the car, so we had to be very careful anywhere we went. We bought very little at the store; mainly coffee, sugar and flour with a ration book,” Geraldine said. Back then, “You survived by growing things you had on the farm.”

She credits her long life to her faith in God, being a teetotaler – with an undisputed and never satiated sweet tooth – and “walking for her education.”

While in primary school, she would walk – or hitch a ride on the horse-drawn school bus – to Hillsboro. When she reached high school age, she walked two miles to then catch a ride in her neighbor’s Model – T Ford that was headed to Lincoln High School (now Lincoln Elementary School).

It shouldn’t be a surprise that she later became one of the few women of her time to attend college, graduating in 1935 from Madison College, now James Madison University. Her mother, “who believed in two things; the Lord and education,” died a few months after Geraldine graduated.

On July 3, 1936, she had the pleasure of shaking the hand of one of the most beloved presidents in history, Franklin D. Roosevelt, when he dedicated Shenandoah National Park. She was 23. She spent her roaring twenties as a home economics teacher at Lincoln High School, taking respites to swim in “the Big Eddy” in Harpers Ferry, W.Va., and vacationing with a girlfriend to Atlantic City, N.J., where they were reprimanded by a police officer for showing their legs on the boardwalk.

Geraldine wore a navy suit when she married Robert “Bob” James on February 21, 1942, with only the pastor and his wife serving as witnesses. She was 28 years-old. Their long and happy union lead to the proudest moments of her life when she became “a mother of three good children.” She is now a grandmother to five and the great-grandmother of seven children.

During her days as a homemaker she kept a garden and canned, froze or cooked the yield for her family and the workers who helped butcher the meat, harvest the grain and tend to their dairy farm operation. Dairy farms were once the economic mainstay in Loudoun, but today only one remains and is operated by Geraldine’s cousins in Purcellville.

Geraldine considers her greatest achievement to be “becoming a Christian and loving the Lord.” She and Bob, before he died in 1983, were lifelong members of Purcellville Baptist Church where she has taught numerous Sunday school and vocational classes. In 1996, she was recognized by the church as one of the first recipients of their Oaks of Righteousness program for her dedication to God and the church.

“Life has been good. I’ve enjoyed living on the farm; raising my children, feeding all my neighbors,” she said. “We had simple things, but we had fun, a lot of homemade fun.”